Our morning was very refreshing. After a relaxing breakfast, we went for a stroll before our first activity. We had plenty of time, after all. So we went to see all the best points Florence had to offer, including the Ponte Vecchio as seen above.

I remembered exactly where Palazzo Vecchio and the Piazza della Signoria was. It brought back fond memories of those hot summer days where I stood before those statues, sketching the dramatic poses depicted by Giambologna. I was also brought back to my first day ever in Florence where we briefly toured the layout of the town, and not only wandered through here but alongside the Uffici Gallery.

We still had time to kill, so I decided to visit the best Gelateria in Florence (in my opinion anyway). Right next to Piazza San Lorenzo is a little gelato store called Leonardo’s, and it was the first gelateria I ever ate at in Italy. We were the first customers of the morning, and like always, the people were very kind. After grabbing out gelato, we proceeded to the steps in front of San Lorenzo and enjoyed it while watching the world go by.

Up next was the complete tour of the Duomo, including the Baptistery. We waited for a little, and as we did I took the time to sketch some of the smaller features of the cathedral. I began with the smaller dome and started to work my way up. As I worked I thought I had seen some figures moving by the shadowed archways depicted below. But looking closely, it wouldn’t have been possible for people to occupy that space, since there’s no way up there. My mind must have fooled me since people are allowed to venture up to the top of the dome itself, and there were people there.

Our tour began in the Baptistery, one of the older buildings of the complex. Much the the cathedral in Pisa, the inside of the Baptistery harbored the same amount of power and glory through medieval mosaics. The inside seemed darker this time around as they were restoring the inside. But all the same, God’s might was reflected through rings upon rings of story telling, angelic hierarchy, and the depiction of the last judgment. 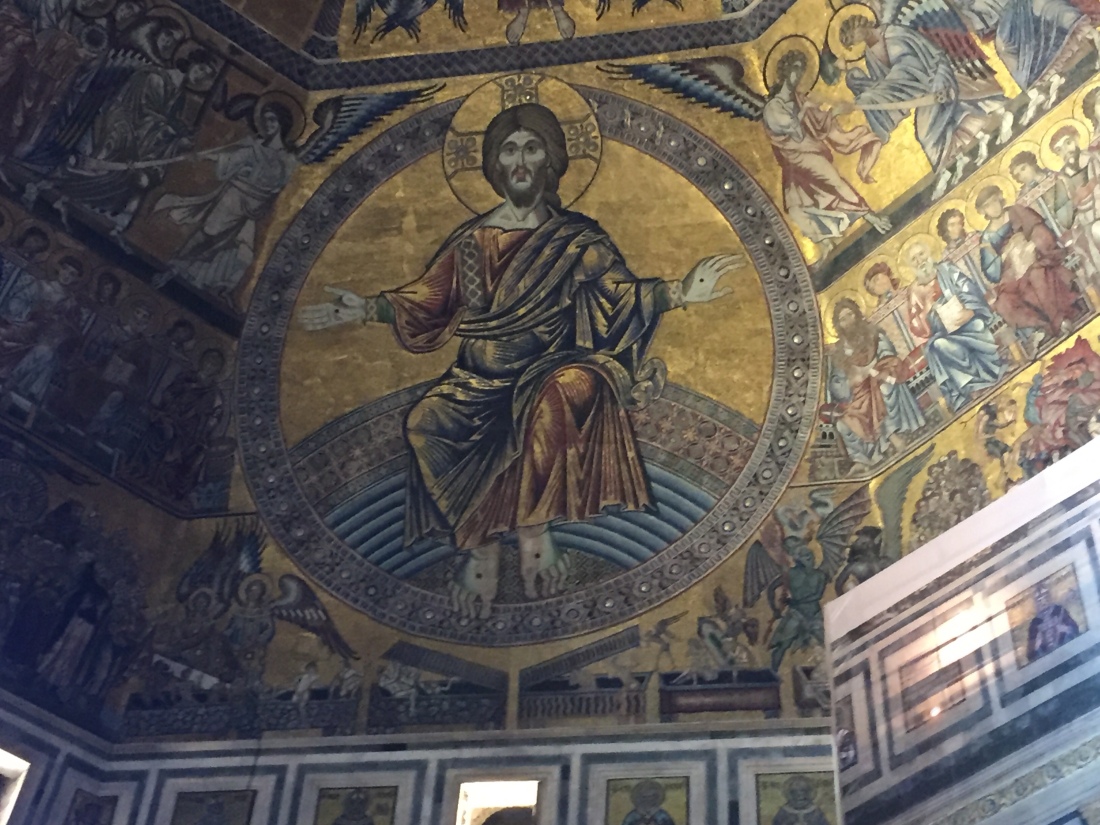 Something that did jump out to me upon observing this for the second time was the depiction of the last judgement. My memory had warped the size of the Devil as compared to Jesus. From what I remembered, the Devil was almost the same size. Seeing him stuck out and posed as a foreboding figure from what I had seen in the past. Probably because my professor at the time pulled so much attention to Jesus casting the sinners to be damned by that thing for all eternity. But seeing it a second time, I realized how my mind twisted the memory of the mosaic.

It is hard to see because the tarp is partly covering the Devil. But notice how much smaller Satan is compared to Jesus. So much attention was brought to this terrifying figure the last time I had seen it that the idea of damnation seemed larger than Jesus. And while it may have been put there to scare pagans into getting baptized, it was never really the point of God’s story with us. In way, it is a visual message for Christ’s followers, by coincidence, that God is bigger than sin, or the guilt or shame brought on by it. God is bigger than our fears or the troubles we are facing. Through Christ, we will overcome.

Next was the inside of the Duomo itself. The inside of this particular cathedral is nothing extraordinary to look at in terms of decoration, but what got me was the space itself. Everything was tall. The arches, the ceilings. But the characteristic that I could not take my eyes from was the dome itself.

The fresco in the Dome drew me in with its symbolism and depictions. I found much more that I had passed off before. Father Time with a broken hour glass. Death breaking his scythe. Various beasts from the Divine Comedy and other Christian texts brought to life. Righteous souls called to the heavens on empty fields while the wicked are chased into the inferno which is peeled open. But there was a detail I found disconcerting in the dome. Two actually. There were two large cracks running from the base up to the center. I asked our tour guide the story behind them, thinking it might have been brought on by an earthquake, or the time the golden ball on top of the dome was knocked down by lightning. It turns out that those crack have always been there since the beginning, and because the construction of the dome was so meticulous, it has to be monitored 24/7.

Aside from the dome, there was one more thing I wanted to capture inside the Duomo. Particularly in the stained glass window above the front door. As I promised, here it is:

After our time in the Duomo, it was time for us to see the one thing every tourist must see in Florence…

I had visually studied the David before, as seen in a previous post. That time I had only captured the face, spending well over 30 minutes toiling over what is considered one of the greatest sculptures of all time. Almost everyone captures the face, I thought for many years after. This time, I wanted the part that no one seems to focus on. The hands.

The most jarring aspect I found of the David when I first saw him wasn’t only the side, but the inclusion of the sling. No one ever thinks or notes the sling he is holding. He just comes across as a nude figure made of marble. But he does have a sling, which has a stone. Which in turn, we are drawn to the hyper real ness of his hands, then arms, then slowly the rest of him, almost as though the figure is made up of flesh.

After our long day of touring, we were exhausted. We passed out for a few hours before getting ready to embark again, only we were going for a leisurely stroll this time. We walked those streets that were still familiar to me, taking in the evening ambiance before settling once again.